Looking Forward to Spring, Remembering When a Robin Made a Nest

This year OTL will be participating in the annual ArtBeat parade with the theme MIGRATION. Here is a little story George has to share about his experience last summer with a family of robins. 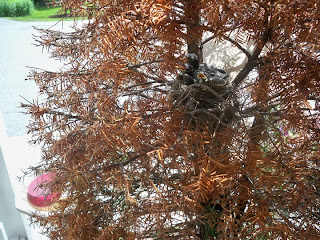 In the month of June 2011 just outside my house in North Reading a bird called a robin had built a nest in a old rotting dead tree and whenever I would go outside to see the bird that was in her nest in the old rotten dead tree I had to be very, very, quiet so that I would not scare the little robin that were in her nest in the old dead tree.  Some days the little bird would here me going out side in my wheelchair then the little bird would fliy away. Weeks and weeks would past until I looked in the old dead tree and in the little bird nest were a few tiny, tiny, eggs and they were tiny bright blue eggs too.  So I did not want to disturb the momma robin from hatching her eggs so when ever I past the nest that were in this old dead tree I would have to be very, very, quiet so that the bird would not fly away from her nest while hatching her eggs. When I would ever pass this old dead tree with a bird nest in side this old dead tree.  Weeks later the eggs would already have hatched so when I looked again inside the old rotten dead tree there laying in the bird nest that were four very, very, tiny furry balls.  When I was whistling for the momma bird to fly back to her nest that was in the old rotten dead tree there before my eyes was four very, very, tiny, tiny, furry little birds.  So like when ever I go outside in my wheelchair  I tried to be quiet so that I would not disturb the momma bird from keeping her hatchlings warm.  Some days the momma bird would here me coming so then the momma bird  would fly away leaving the four tiny, tiny, furry birds unprotected when I were gone she would fly back in to her nest again to sit on the baby birds again.  One day as I was wheeling out of my house I had my kodak camera hanging around my neck.  So I had held my kodak camera to my eyes and I had got a picture of this tiny bird nest with one very little tiny, tiny, little bird with it little tiny beak wide open like if that bird were crying for his/her mother for food food.  A few weeks later it was July 2011, so I looked in the old rotten dead tree again and the little birds was not in the nest no more the little birds were all grown up so the all flew away leaving on empty nest in the old rotten dead tree.
Posted by Outside the Lines Studio at 8:01 AM No comments: