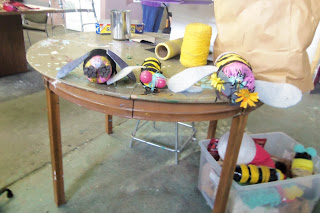 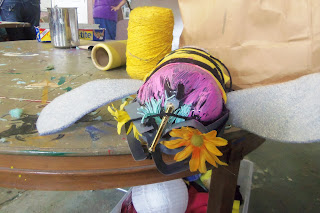 On Wednesday May twenty third 2012, when I had arrived at outside the lines studio I was ask to make a bee by decorating a big empty coke bottle.  So I had took a  great big empty coke bottle and a staff person poured some glue at the top of the coke bottle and then I took a string of yarn and I wrapped the string of yarn all of the way around the bottle and I kept wrapping the string of yarn until about eight straight rows of yarn were rapped around the great big bottle.  Then I  made two big eyes by gluing two big plastic egg shells to the great big bottle.  Some that were already made had big bottle caps or rubber glued on for eyes.  A few fake bees that were made had big dandelion flowers for eyes and some even had fake wings too.
Posted by Outside the Lines Studio at 12:07 PM No comments:

On Friday May eighteenth 2012, at outside the lines studio some clients and staff would go along the tufts trail to a building and then walk up 42 steps and they see a room with  three micro phones three head sets the song board where the person that is doing the song board could have any body take song request down and play the song on the radio.  You will only have a few minutes at the radio station then you go back down stairs and you would see a big room with a few tables and a coffee bar too.  So you go back and walk on the side walk and then you would go across a great big wide parking lot then you would take a right to walk down the Tufts University trail and then across the parking lot to the outside the lines studio   Then in the building a lot of clients paint or draw and do the otl blog too.
Posted by Outside the Lines Studio at 12:17 PM No comments:

On Friday May eleventh 2012, I had said goodbye to a very, very, Dear friend named Abbey, we had made a video together.  Abbey tells me that she is going back to her dorm on the Lesley University campus to pack all her clothes in a suitcase. Then she is going back to her home so that she could work this summer to earn enough money so that she can move to Boston.  When Abbey was at Outside the Line Studio on 70 Colby Street in Medford she would help some of the clients with panting, and drawing and making a dinosaur out of paper mache and other things too.  Abbey, will dearly be missed but she did say to me when she has enough money she is going to move back to Boston and she might just might be visit the old gang at out side the line studio again.
Posted by Outside the Lines Studio at 11:37 AM No comments:

At Outside the Lines Studio in Medford 70 Colby Street now some staff and clients have been making a lot of little puppets from three big sticks and wrapping cloth around the stick.We had even made one big dinosaur and one little by getting some chicken wire and then we wrapped paper mache by dipping in a big bowl of a lot of glue and a lot of warm water too all over the chicken wire and then when the paper mache drys we paint it.
Posted by Outside the Lines Studio at 11:54 AM No comments: